So, it’s been a while since I’ve posted anything involving C-pop. I’ve missed so many exciting and potential reviews that it’s truly saddening *tear drop* Not to mention, I’ve missed so many opportunities to review on anything about Super Junior, which in my books seems like a sin I’ve committed (I’m so sorry Oppas, please forgive me!)

Well, as the title may have hinted already (honestly Hyunnie, how thick can you get?!) this post will be relevant to the official teasers for Super Junior-M’s “Swing”! HOORAY FOR THE COMEBACK OF SJ-M! God I’ve missed them so much ><

And so, without further ado, let’s get started with the release of Super Junior-M’s teasers for “Swing”! 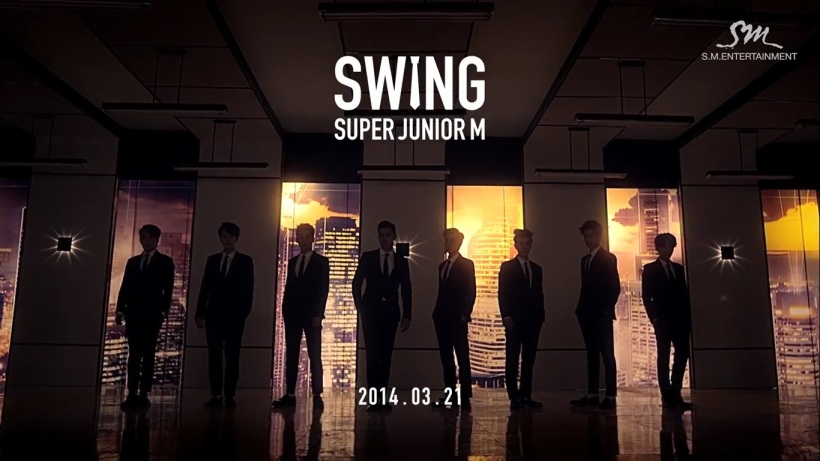 So, Super Junior-M are finally making their anticipated comeback after a hiatus of 1 year and 3 months with their 3rd mini album “Swing”! We saw them release their full album “Break Down” early 2013 (which is possibly one of their most successful albums since “Super Girl” back in 2009) and now they are back for another run with “Swing”. 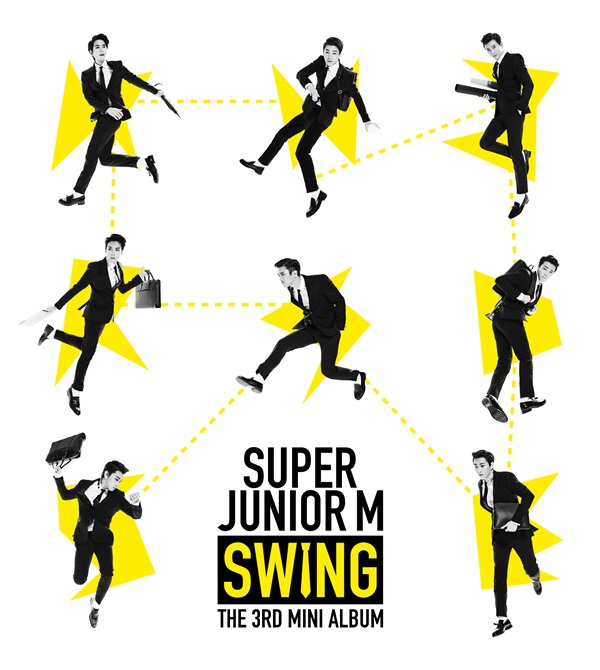 8 sexy men in full black suits? What more could you ask for ladies?

I have missed Super Junior sooooo much~ Last year’s release of “Blue World” just didn’t cut it for me, and despite the active releases from the sexy duo Donghae and Eunhyuk (D&E), it just wasn’t the same without the whole gang together. However, judging from the numerous teasers released over the past 2-3 days or so, I have to admit that Super Junior are finally following back to their roots with their dorky and hilarious attitudes tied together with an upbeat and unique track. Despite this being Super Junior-M rather than the entire group, you can still sense that somehow members such as Shindong and Heechul had some sort of part in the making of the MV (or was it just my imagination?? *shrug* Who knows~~)

Okay, so over the past couple of days, SM Entertainment has been consistent in releasing some sort of teaser for the impatient addict fans (*cough cough* Like me *cough cough*) which include Teaser #1, Highlight Medley and Teaser #2.

Teaser #1 shows the drama side of the MV which I have to say it now: THANK YOU SM FOR BRINGING THIS BACK! It has been too, too long since I’ve seen something even CLOSE to a dramatised MV from Super Junior, or any of their subgroups. The latest drama MV I can think of is probably D&E’s Motorcycle, which shouldn’t even be counted since it was released under AVEX. If I’m looking at anything of a Korean-type MV, then the last would have to be “No Other” back in 2010…now do you guys see my point?

I absolutely adored the 50 second teaser,  and I’m still replaying it over and over just to see the little hints here and there ^^~ (WARNING: Sort of picture heavy below ><) 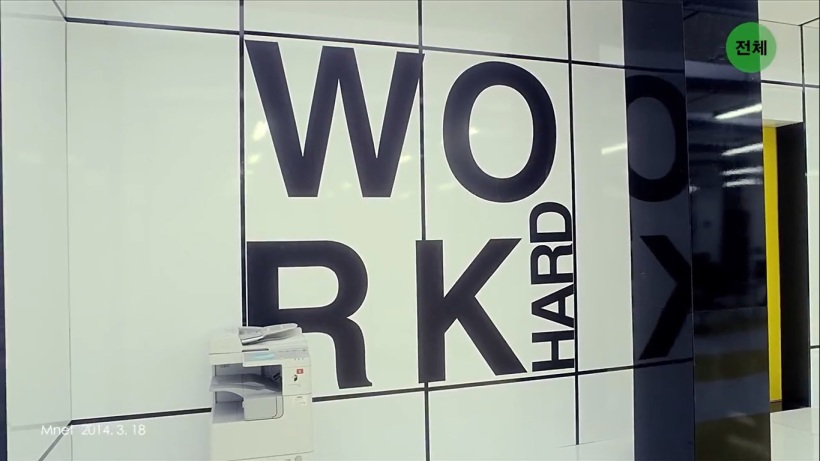 Foreshadowing of the MV? I think not! 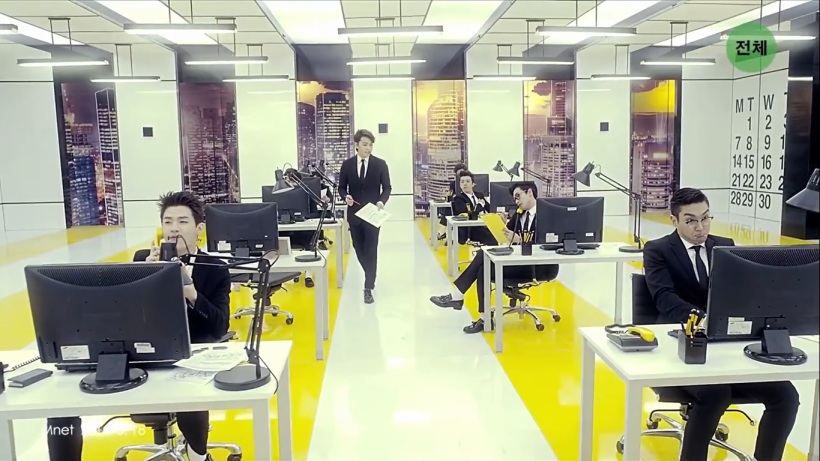 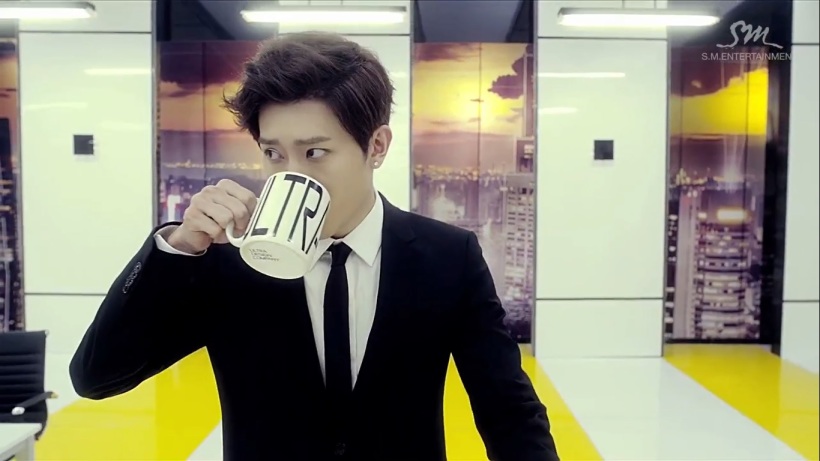 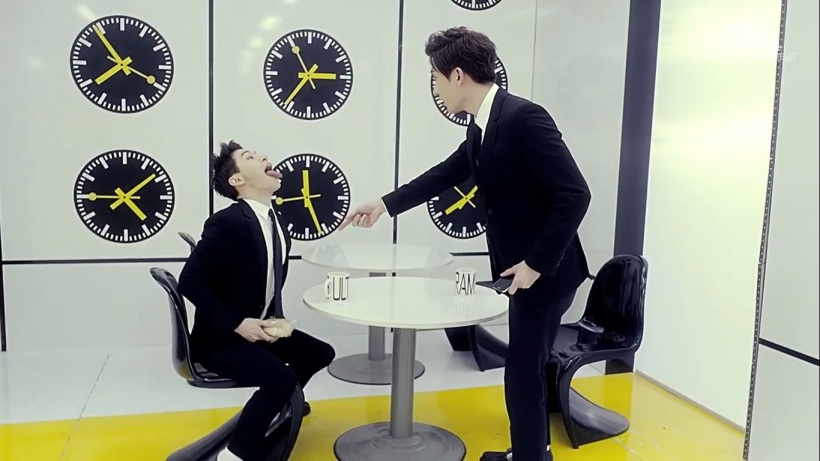 Typical cute Henry stealing a bun from poor tired Zhou Mi? Why not?! 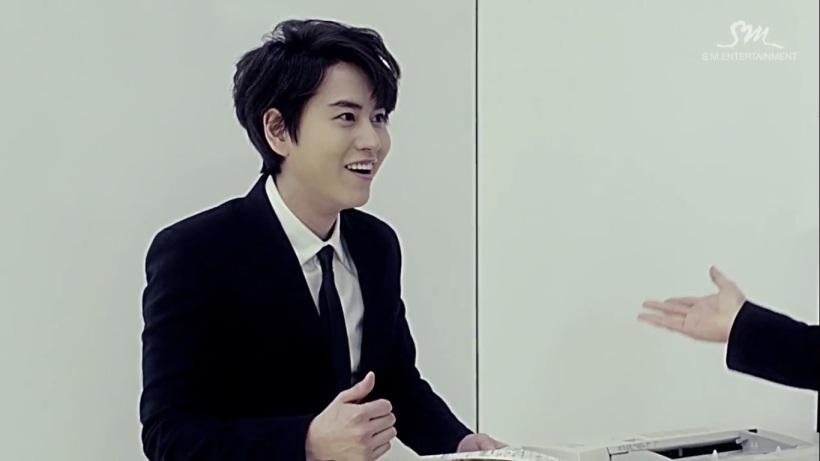 Clueless innocent Kyuhyun struggling with a printer?! Who would have thought that the Starcraft pro-gamer could struggle with that? 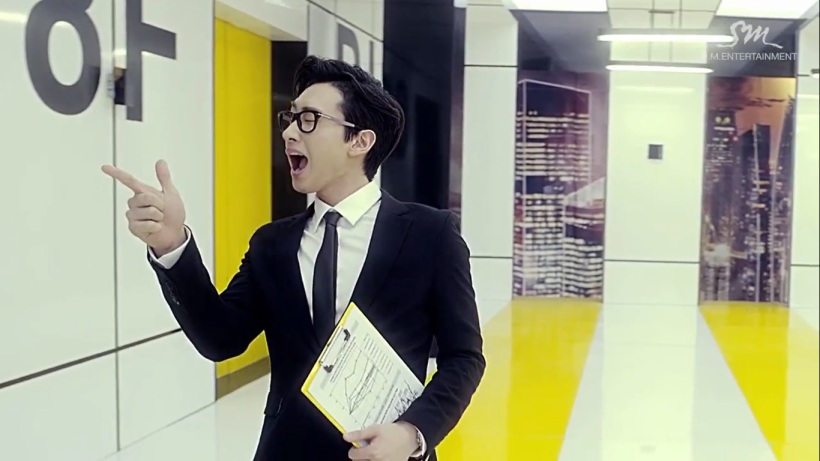 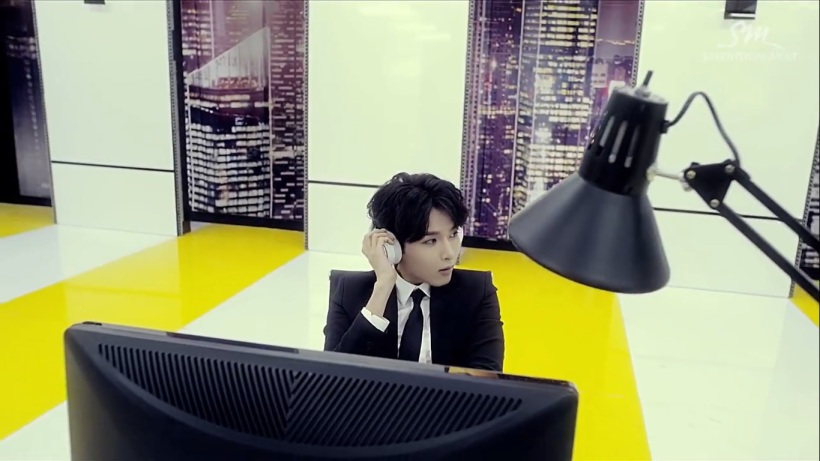 Stressed out Ryeowook just doing his thang and chilling out~ 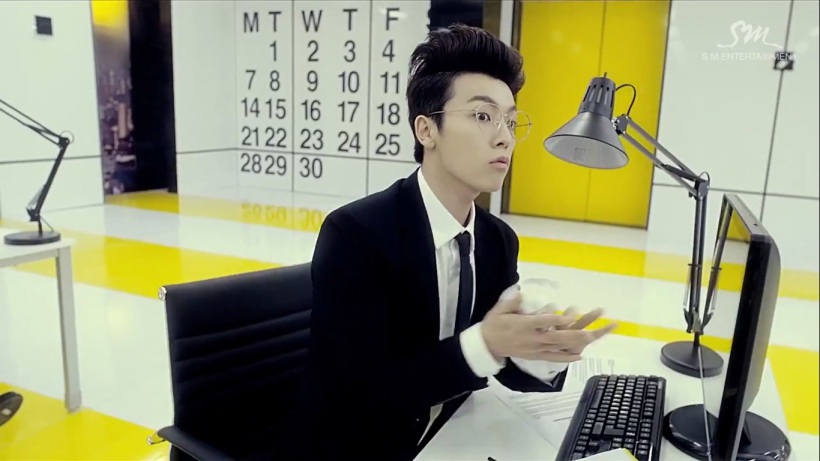 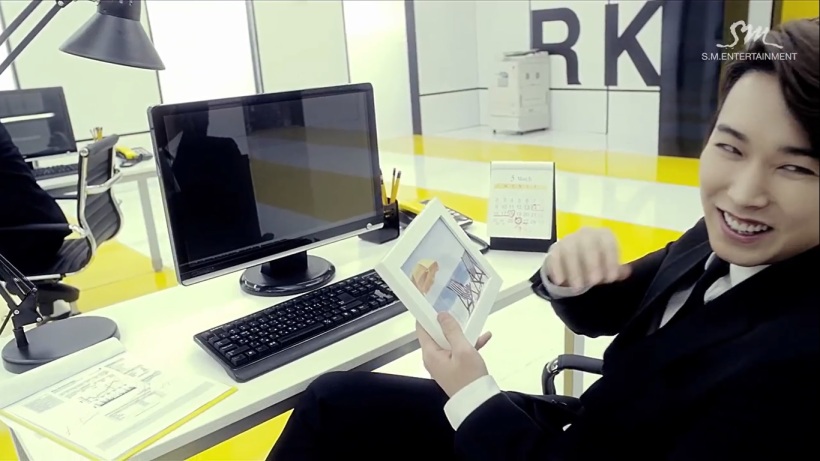 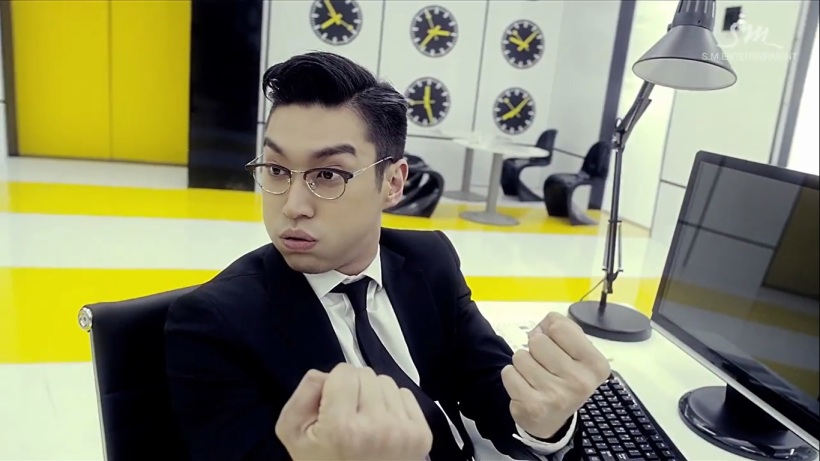 And finally poor tired and sleepy Siwon just defending himself against…himself (btw, he looks super adorable in the teaser XP)

Next came the highlight medley, which showcased snippets of each song within the mini album. Once the whole album releases, I will give a thorough review of the whole thing. For now, just appreciate the music and the beautiful graphics~

The return of the sexy men in black. By the way, this is totally going to be my new wallpaper/possible new banner ^///^

And finally, Teaser #2 was released just a couple of hours ago, throwing bits and pieces of the dance and just more dorkiness from the boys ^^~ And can I say one thing? They are totally badass, full stop. 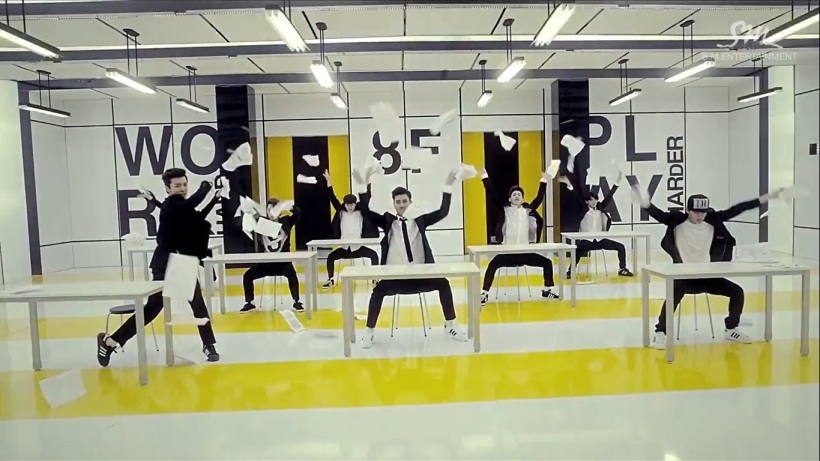 Look at that badass shot right there. That is what you call 100% badass ladies (and gentlemen) 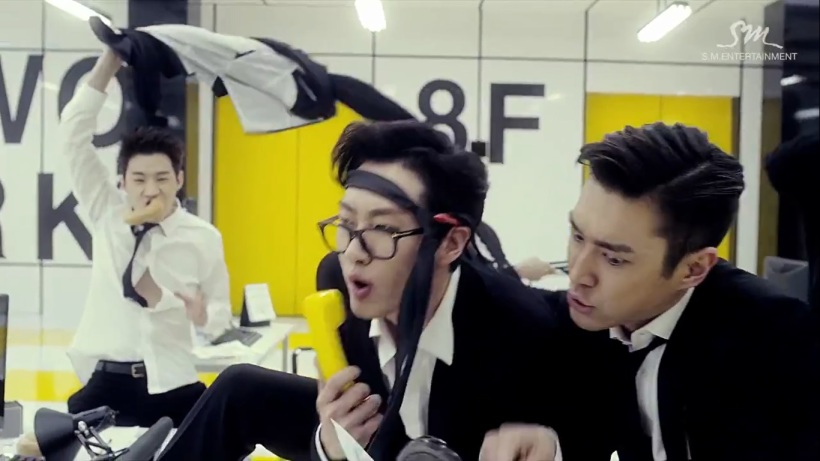 And then this shows up…I might have to take my last statement back people…WHAT?!

Now, before I show more pictures, there is one thing that I do have to point out. As I’ve seen in the comments section below this teaser, there were many comments that truly annoyed me. Annoyed me so to the point that I just had to mention it in this post. It is in relation to the next picture posted below: 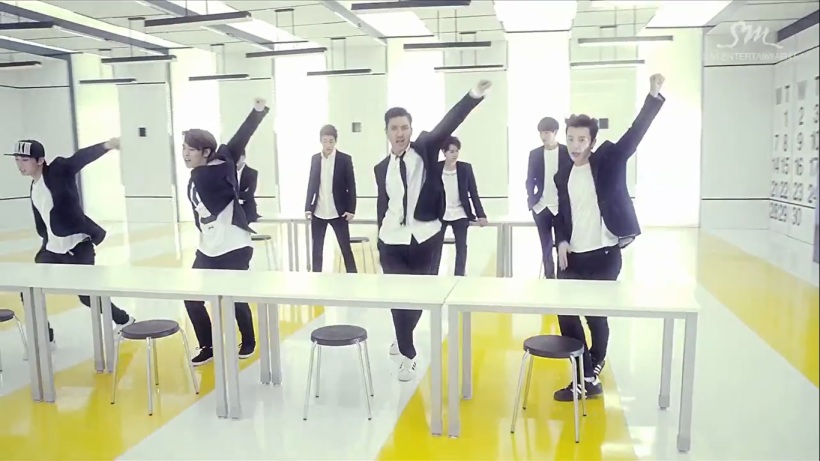 And so, how it went was that many viewers believed that SJ-M here copied EXO’s “Growl” in terms of how the dance is laid out and filmed…

Can you instantly see the ridiculousness of this accusation? And why I just had to say something?

Has some people kind-of forgotten that both Super Junior and EXO are under THE SAME COMPANY? Has that fact flown away somewhere, never to be seen or heard again? I don’t even feel bothered focusing on this anymore…*sigh* Seriously, the logic of some people…I will only say one thing, and one thing only.

They are both under the same company, who use the same staff to film, create and co-ordinate everything that they do, including how an MV should be filmed. The chances that one scene would look like another is HIGHLY LIKELY and the chances are, it was a concious decision from the people above.

Alright, not going to stay on this any longer; moving on.

Another thing that seems to be bothering some people too (including myself) is perhaps the next picture: 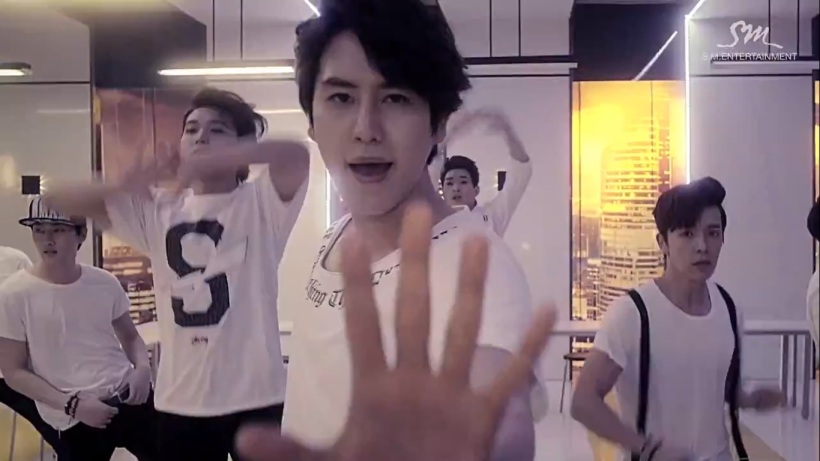 THE RETURN OF THE KYUHYUN HAND GESTURE WHIST SINGING HIS PART!…wait, this wasn’t it!

Ahhhh no, not that one (honestly though, does Kyuhyun-oppa have no other gestures to do anymore? Just saying~) – it’s this one: 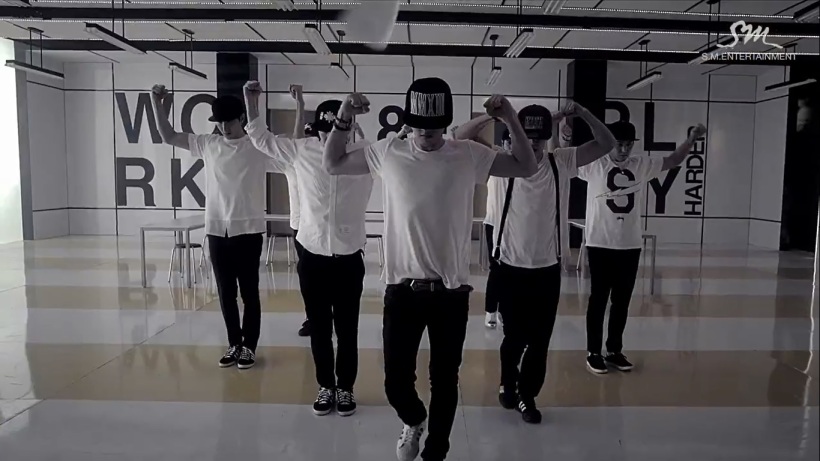 Very sexy,macho with plain shirts yes but…doesn’t this give you a familiar vibe to another group??

Doesn’t it?? I just can’t quite put my finger as to who that might be… 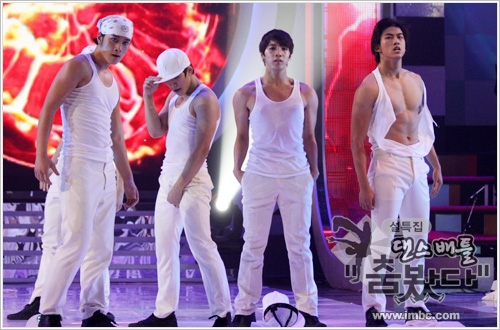 Now, you may be wondering “Hyunnie, but the hats…” Guys, if you check out the picture above, on the floor, the caps from the dance battle have been thrown off…And honestly, check any of their dance battles; their style of dressing and dance is pretty similar…I’m so sorry Suju oppas – I couldn’t protect you here T_T

I guess all I can say is that I welcome the new sort of image they are trying to share and try; they really suit it but…an unsettling feeling still remains in my stomach, nibbling at it while telling me that “it is original – so generic~~” GEEZ I KNOW OKAY, I KNOW!

I hope you all enjoyed this post (please excuse the ranting ><) and I will probably be back real soon to talk about the actual full album and MV once it releases!

See you all very soon and thank you for reading! 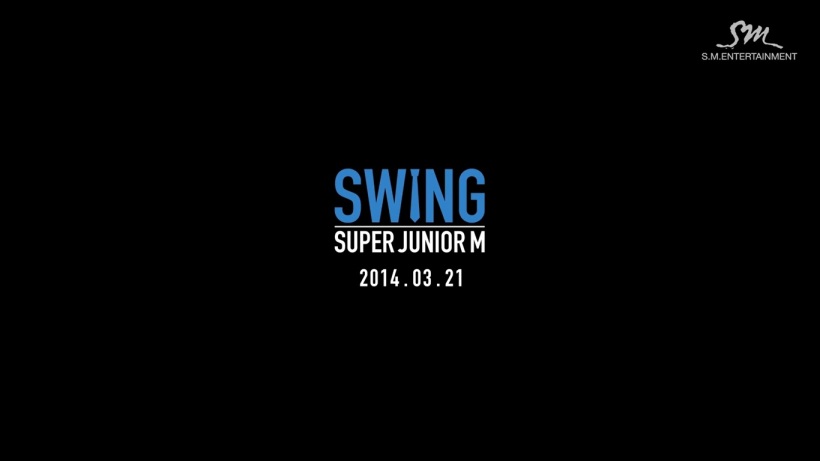 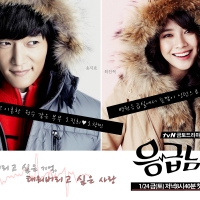 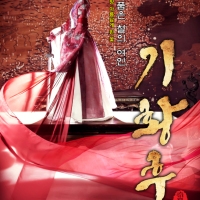